Inspired by the XVT in Vermont, the XCTtrail (Cross Connecticut Trail) has been something of a grand hallucination dancing about my head for at least a solid three years now.  The general idea is that of a predominately south-to-north touring route, maximizing time and distance spent off pavement.  Giving credit where it is due, my first go at this was to simply follow my friend John's dual sport motorcycle route (this guy: https://ridewithgps.com/routes/10732116).  John's route is largely a mix of flowy dirt roads and asphalt.  Overall, it rides fairly well on a cyclocross/gravel bike, but the occasional exposure to traffic and general lack of technical challenge left room for improvement (From the cyclists perspective.  I'm sure it's just fine at the helm of a motorcycle).  The Elm City to Waramaug Loop was the next evolution, with much of the road sections swapped for the Larkin State Park Trail.  After a couple of rather memorable excursions with the one and only Inspired Adventurist, the usual post expedition banter prompted me to get back to work and make some alterations.  In my mind, I wanted to pull it more toward being a mountain bike route than a gravel route, link up with the Western Mass Trail/XMAT, and have a generally linear flow.  Formal version 1.0, and the first to officially bear the name XCTtrail managed to achieve exactly ONE of these goals.  Version 1.0 has some major access issues and will not be publicly linked, but here's a screenshot of the map: 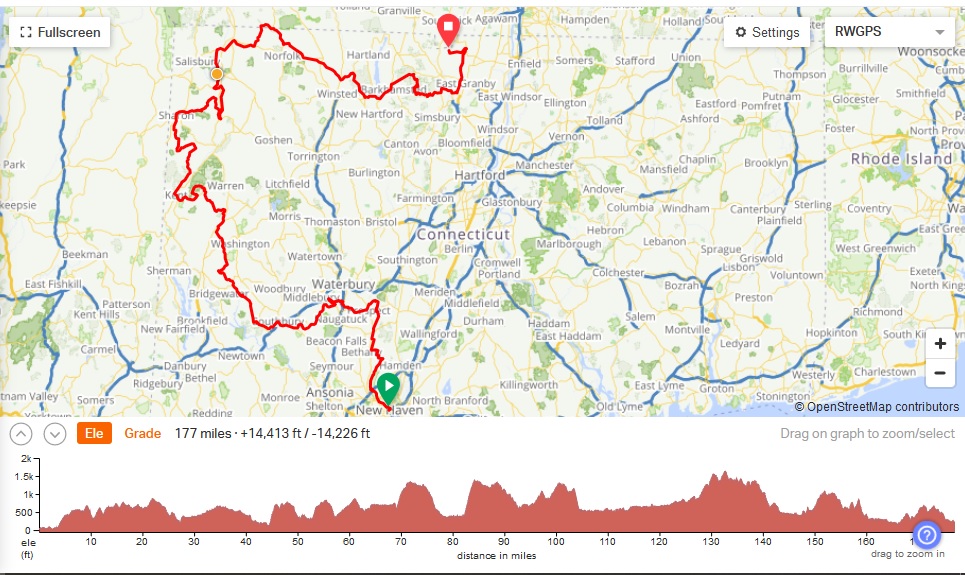 Note, this trail is a far cry from linear.  For reasons outlined in a great article on Bikepacking.com (Bikepacker's Guide to Public Lands), the Nutmeg State is a nightmare for the long distance route mapper.  Only 0.3% of our lands are considered "public", tying the great state of Iowa for the lowest allotment in the union.  Putting together long routes on dirt requires considerable research, trial and error, with a result resembling a giant scale game of cartographic hop-scotch, bouncing between the state's patchwork of parks and trails at the margins of its teeming populous.

Having laid out a somewhat hastily prepared route, I set out on a late September morning to give it a test.  Wisely, all of my riding buddies opted to busy themselves elsewhere that day. 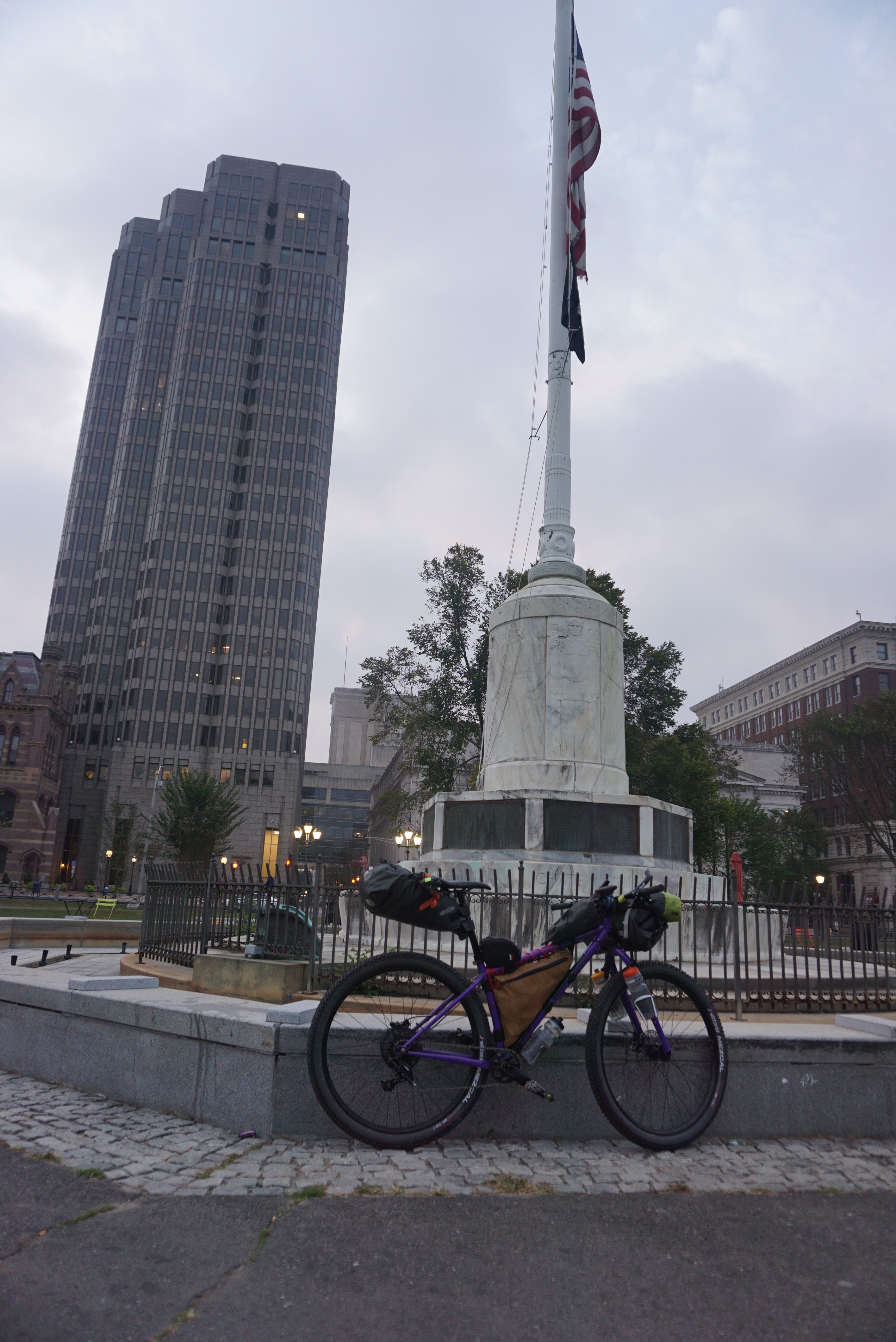 This, and likely all subsequent iterations of the route, start at the flagpole on the New Haven town green.  The green is an easy cruise from the train station, making it accessible for those coming from NYC or other points along the Metro North railway. 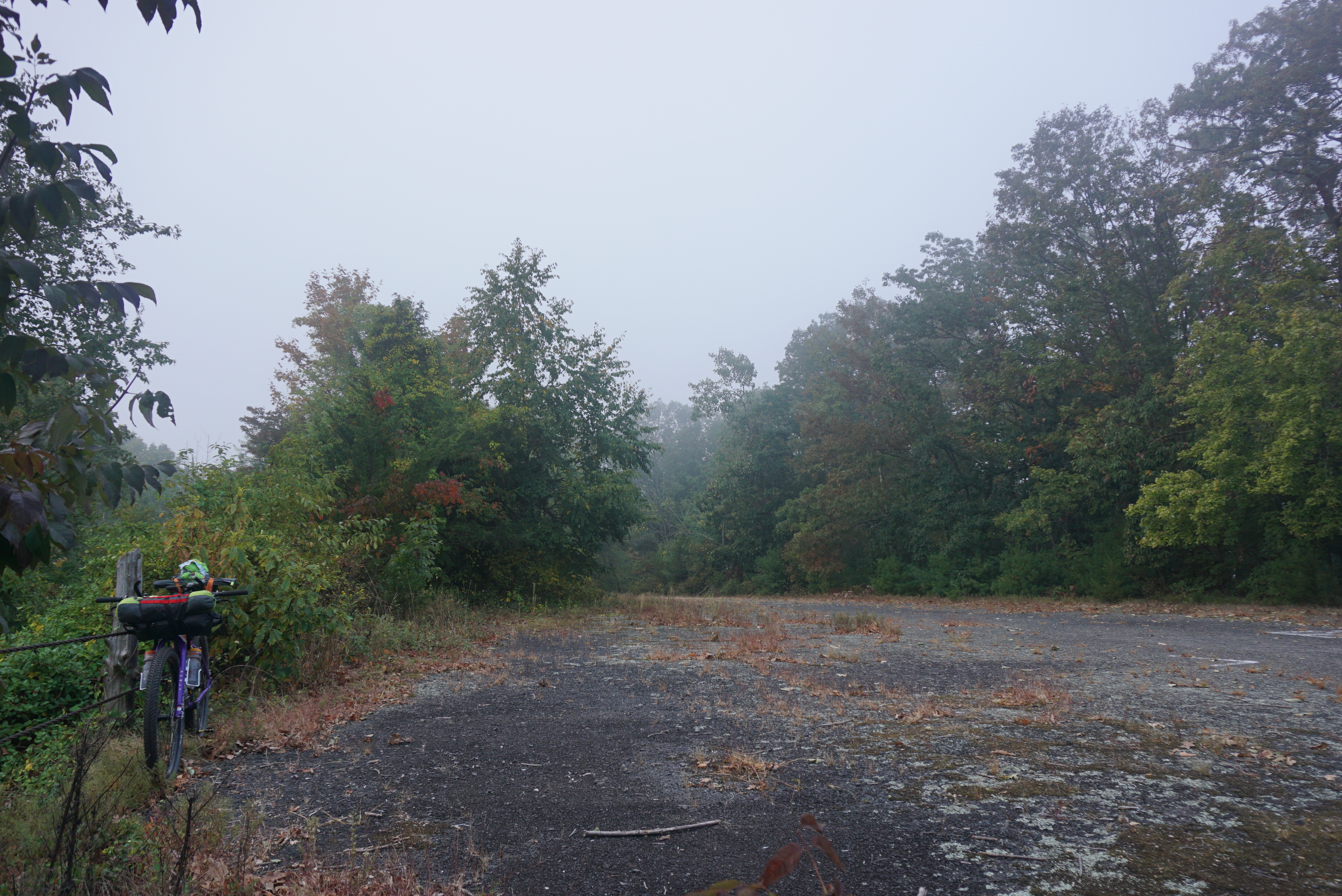 The opening miles trace the ridgeline of West Rock State Park, which is closed to cars, but still technically paved.  After that, there's an unfortunate number of miles until the dirt really starts. 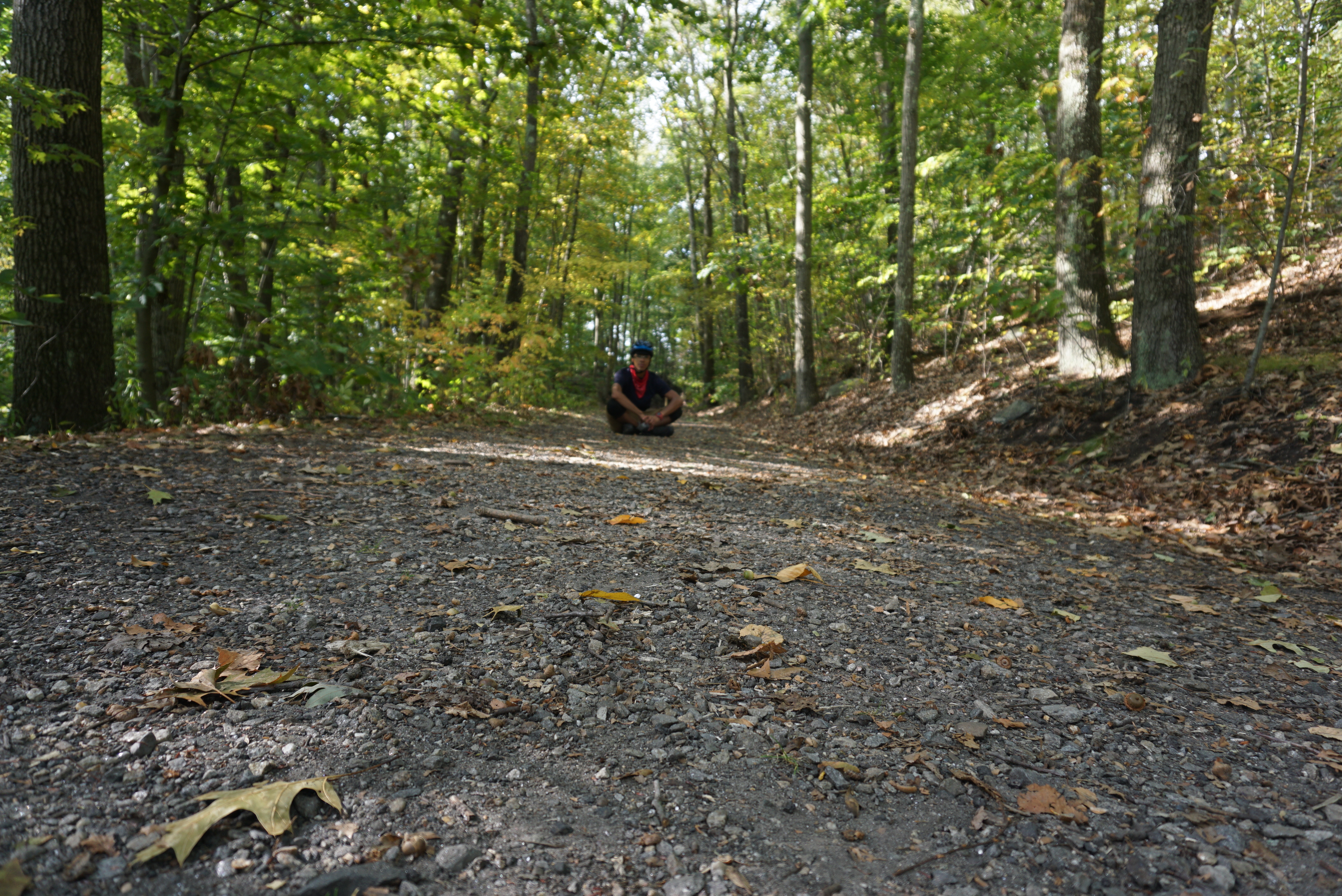 The fun begins again in Naugatuck, on the Larkin State Park Trail. 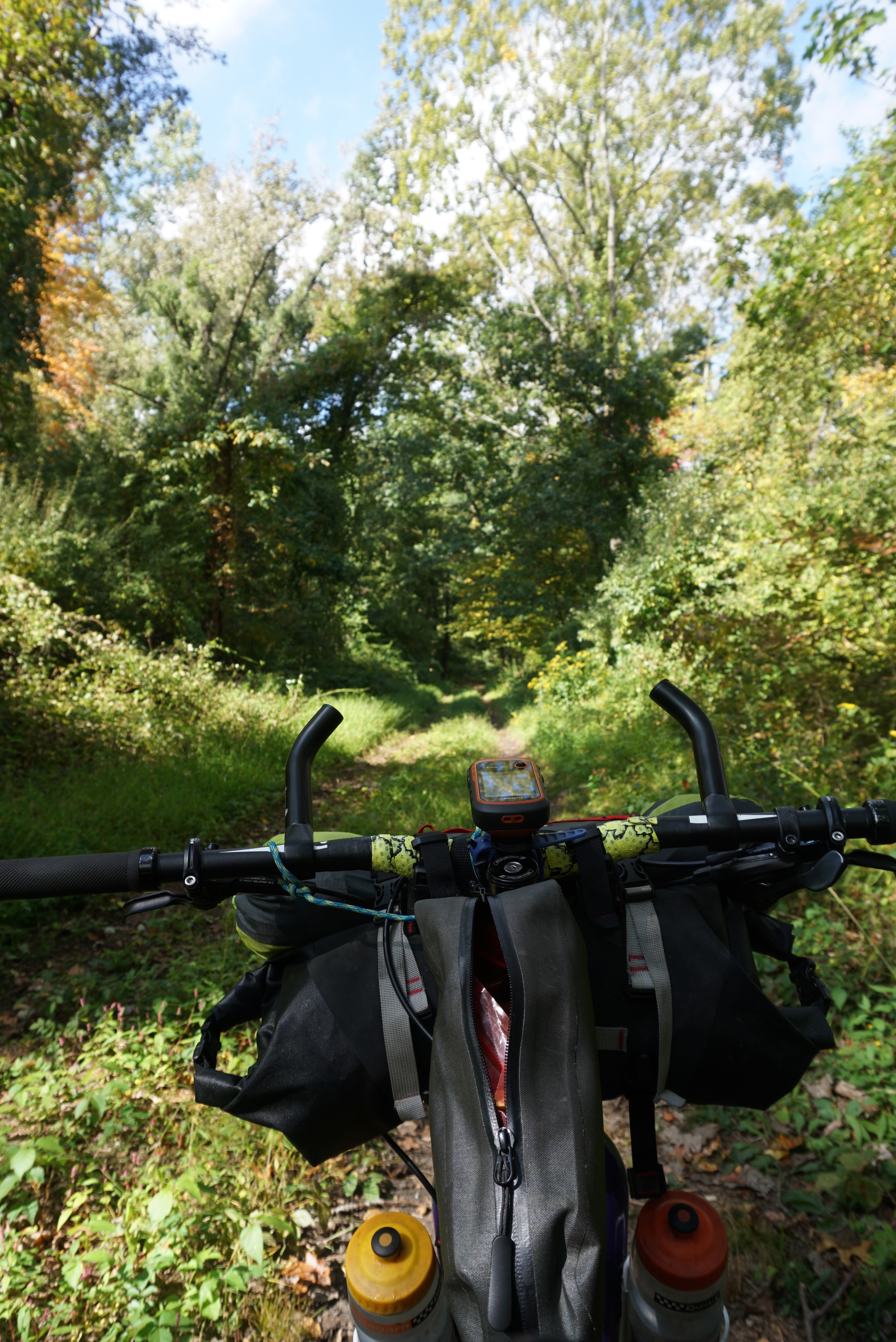 The trail is generally easy and non-technical for the majority of its 10 mile length, but becomes a bit overgrown toward the end, just outside of Southbury. 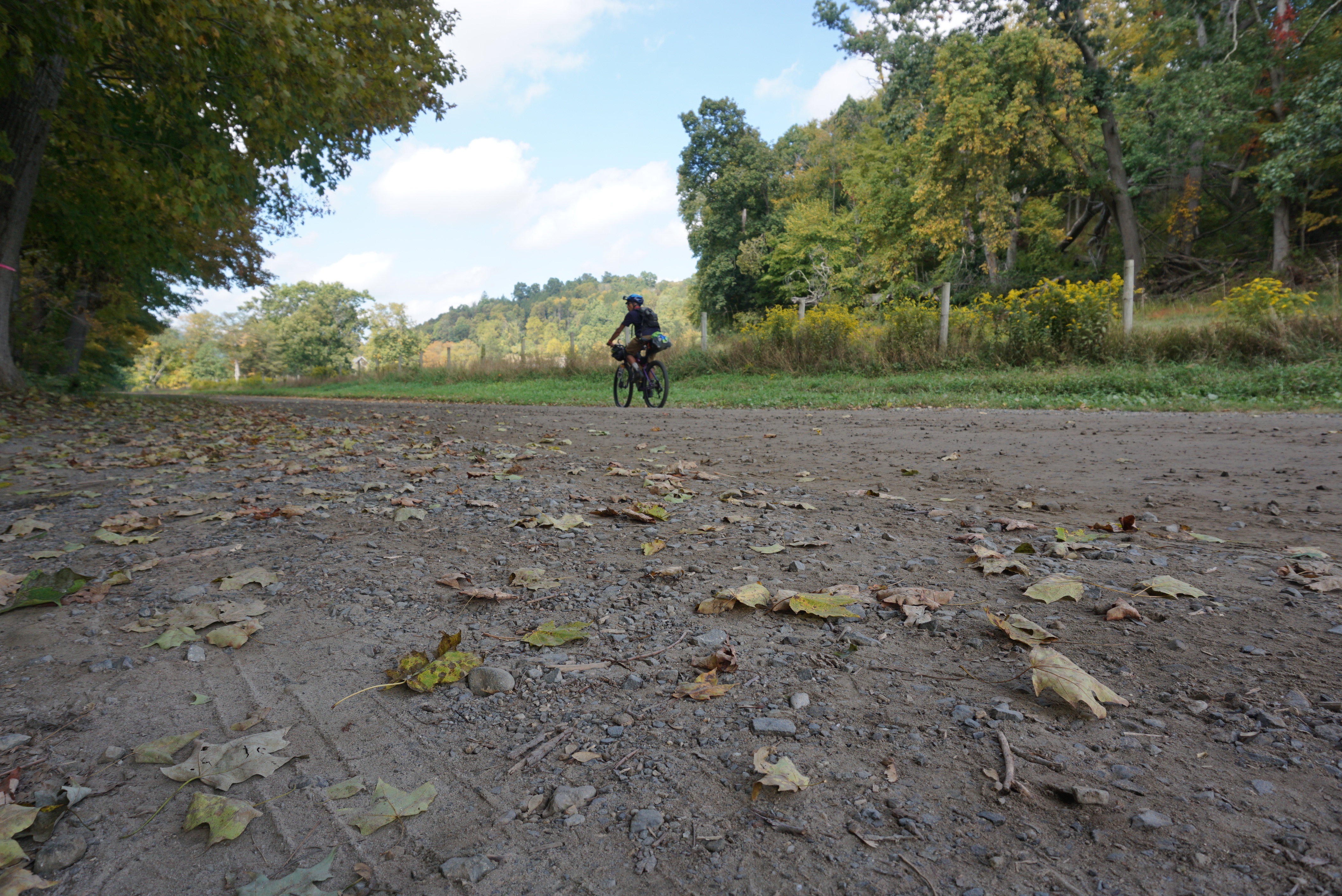 From Southbury, one will find a number of fantastic, quiet dirt roads of varying surface quality.  Some smooth.  Some chunky. 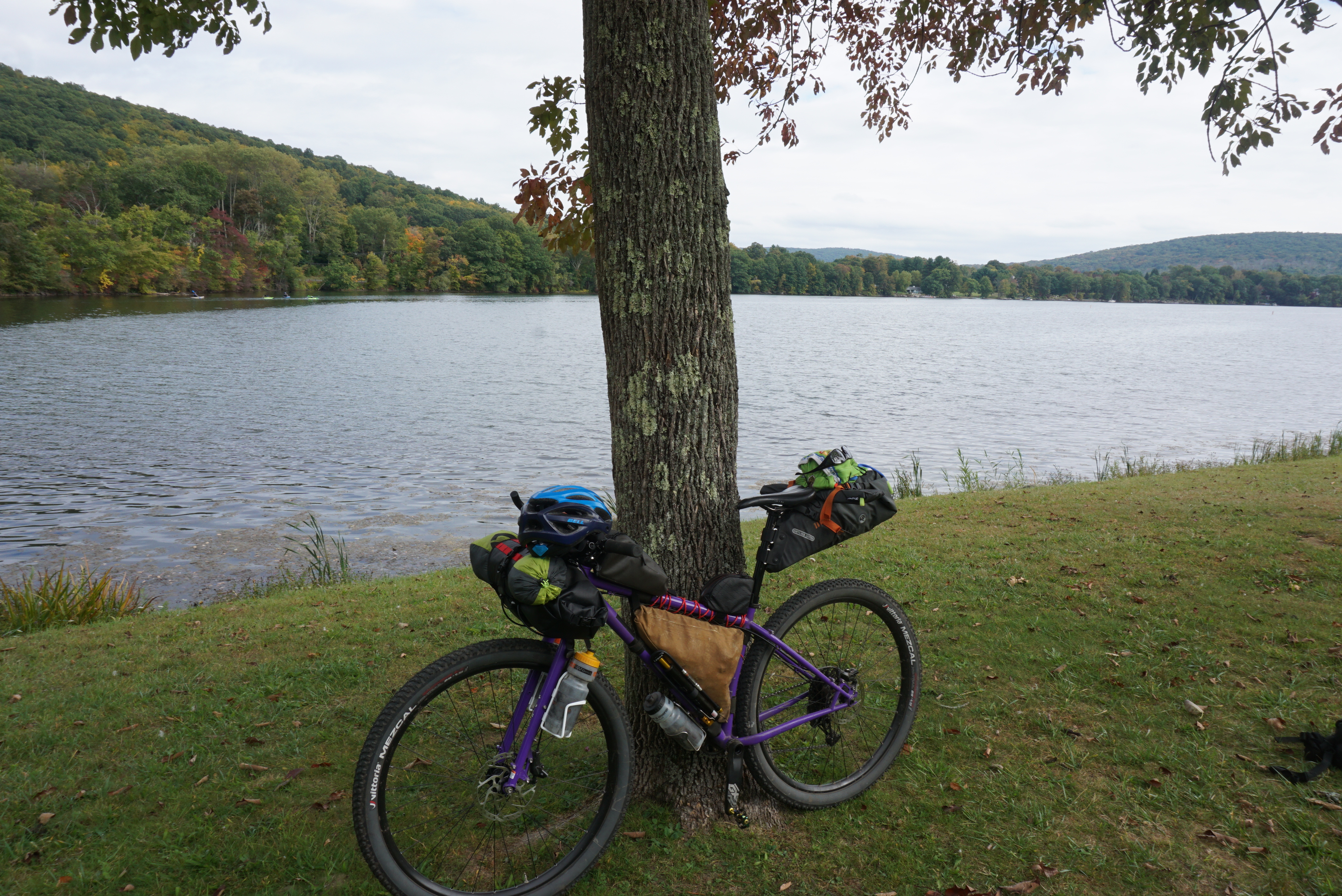 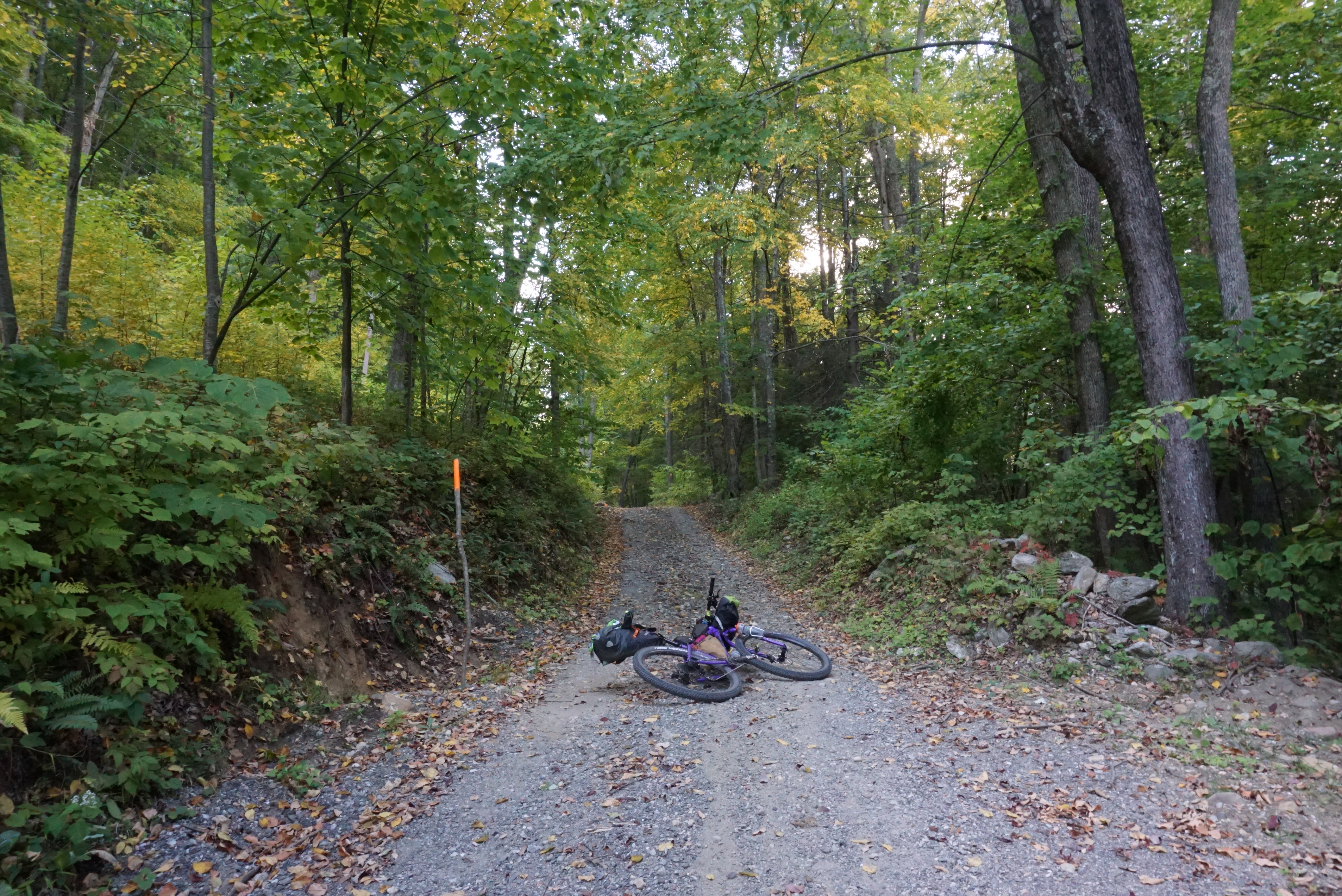 The other theme of the ride is climbing.  The Skiff Mountain climb out of Kent may be toughest hill I've encountered in the state in the 16 years that I've lived here. 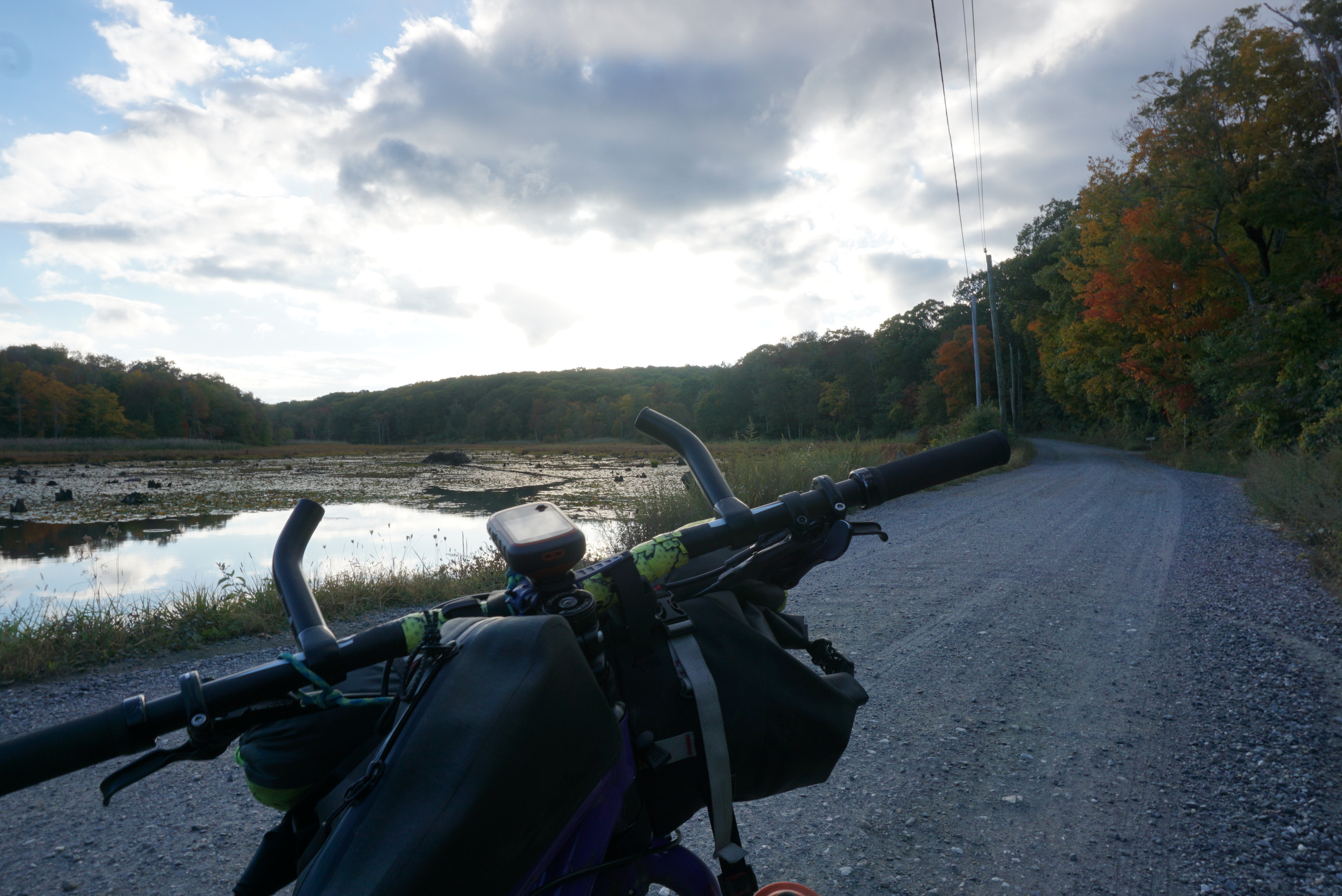 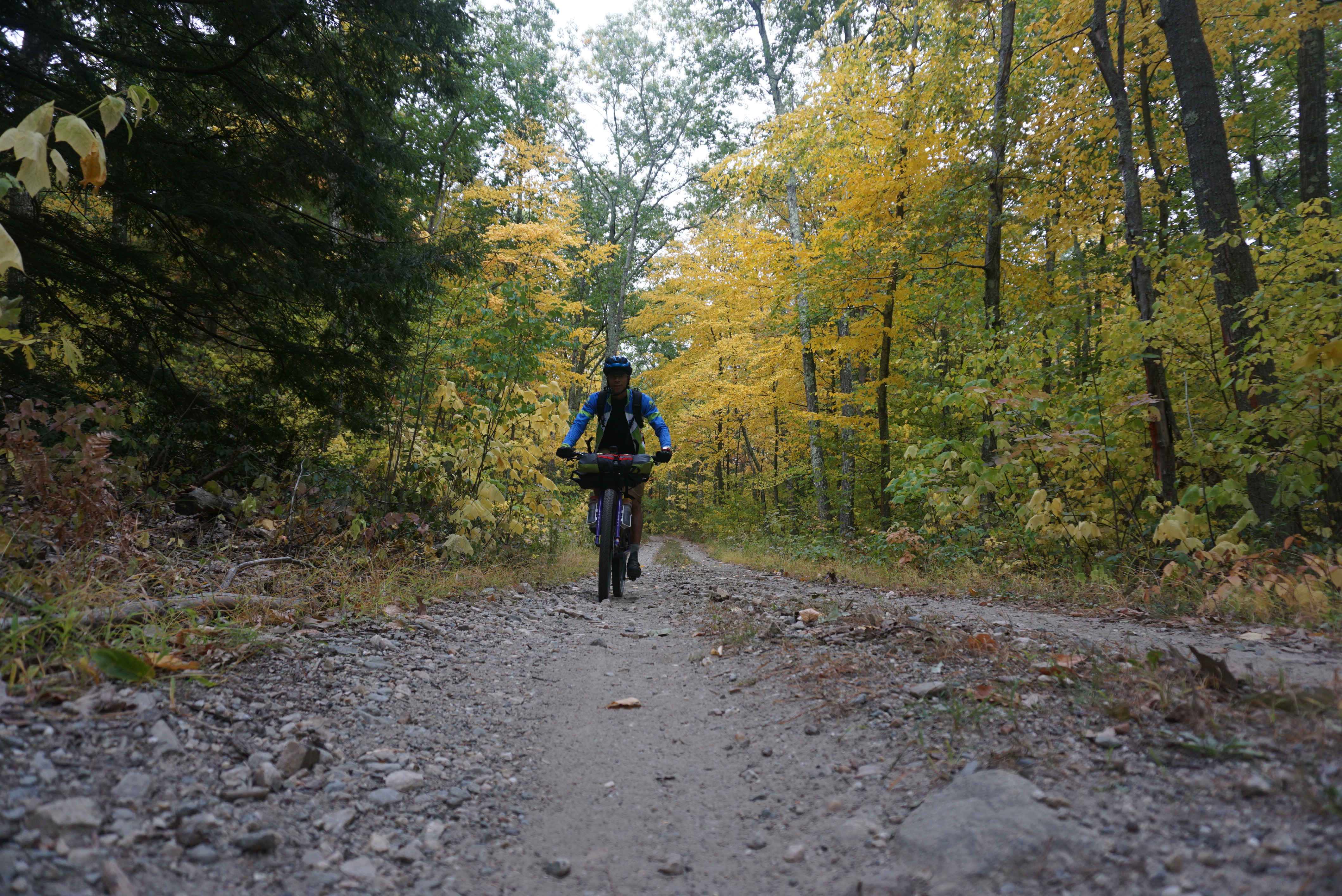 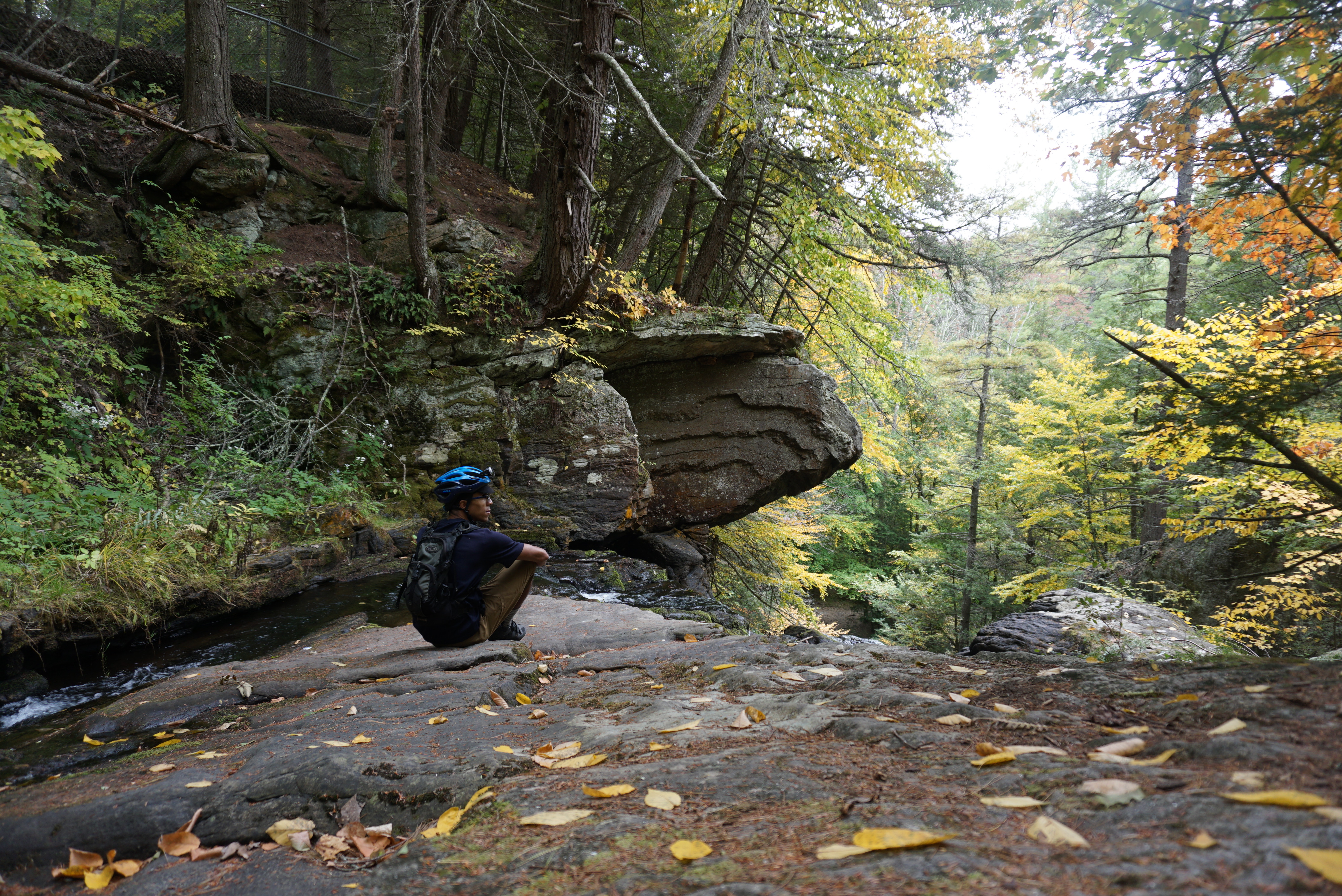 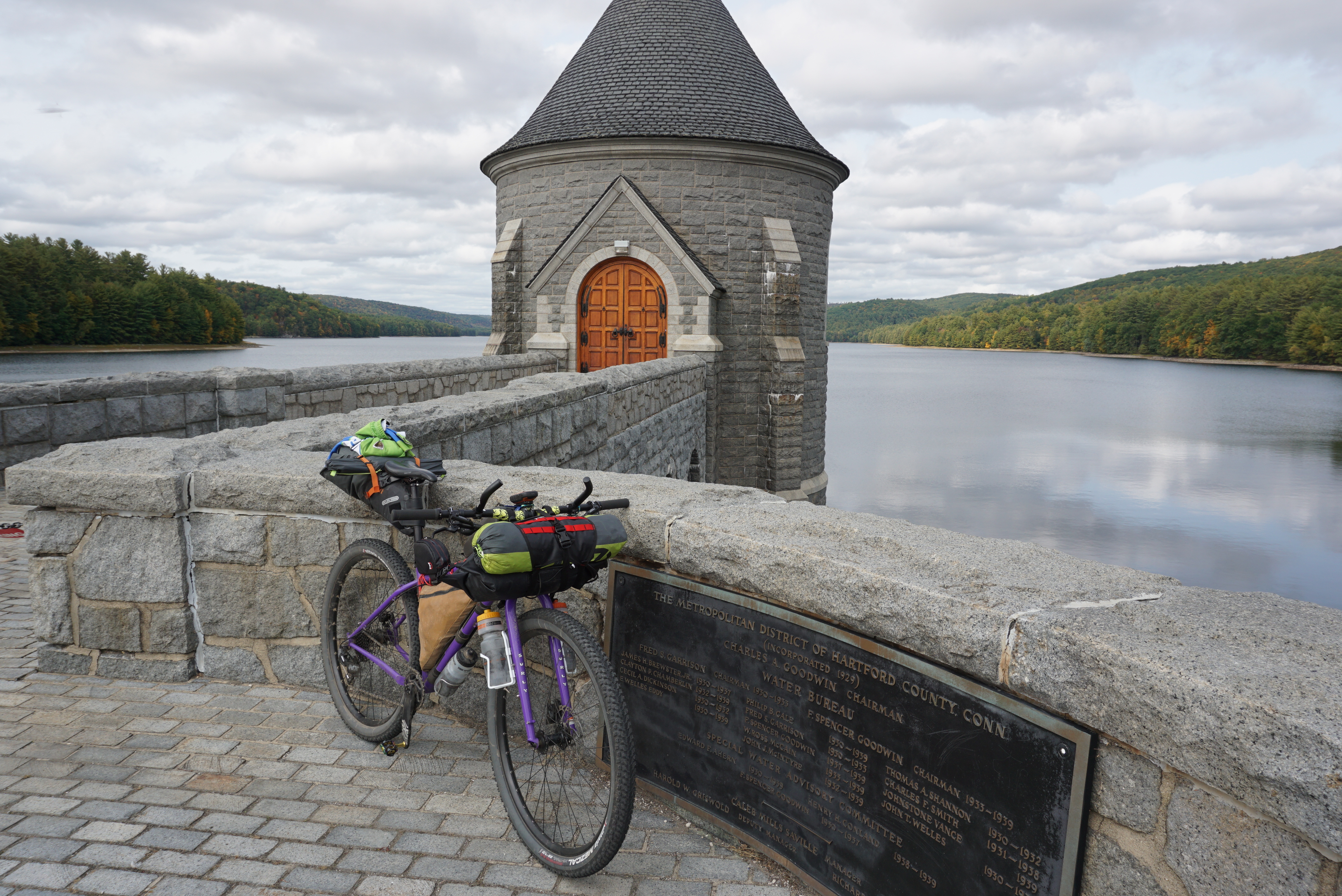 From there it's a long slog on paved roads (some scenic, some unfortunate, all hilly) until a little ways after the Barkhamsted reservoir. 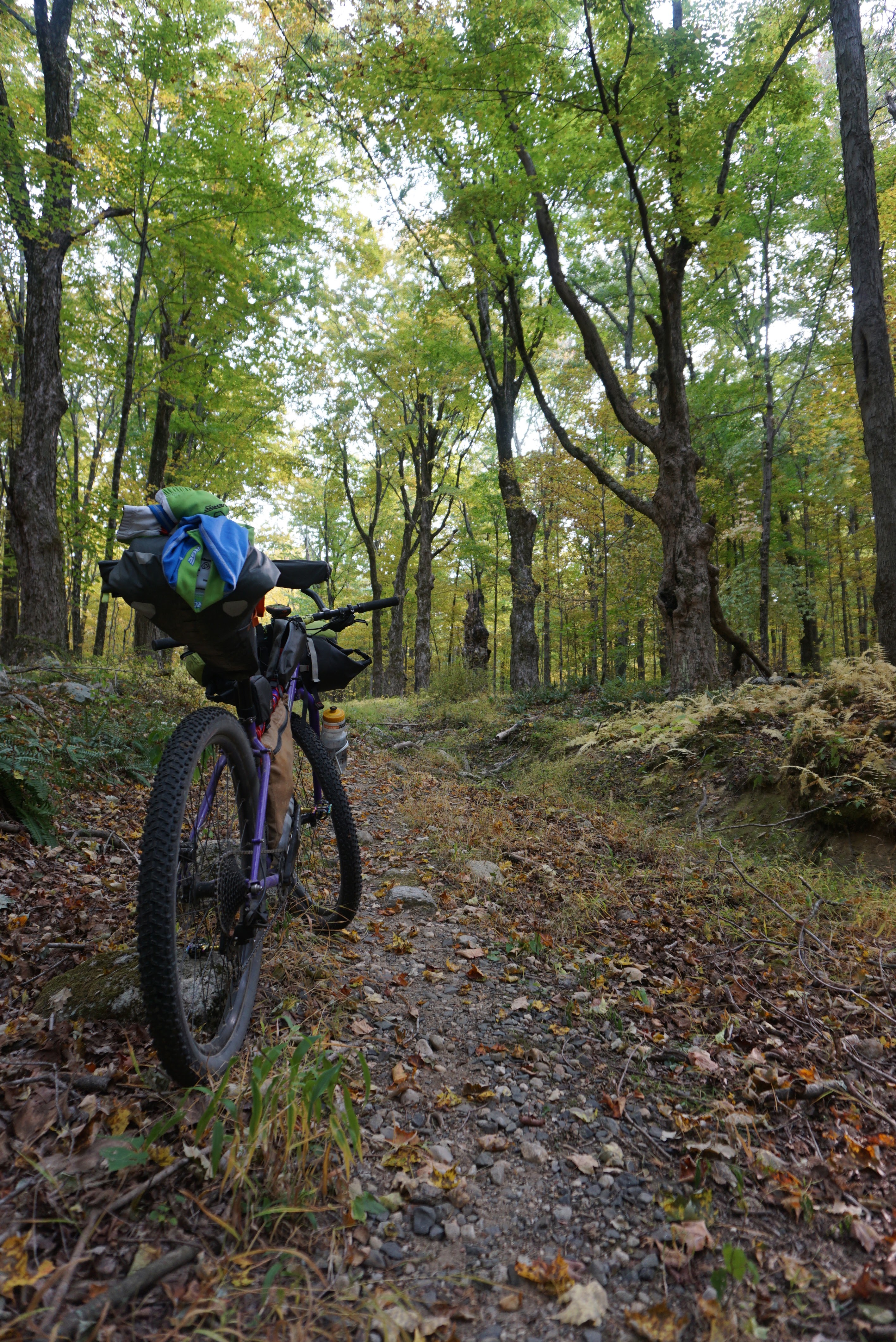 Here's where things went rubber side up, figuratively speaking.  The trail in the photo above, which shall not be named, is not open to bikes.  There were no signs stating such at the end where I entered, but was marked accordingly on the other side.  Research afterward confirmed.  The network of trails that it eventually joined was also closed, not only to bikes, but to all users, due to recent "aggressive bear-on-dog encounters".  Yikes!  These trails were the mountain bike-y-est of the entire 180 miles, and were meant to be the highlight of the route. 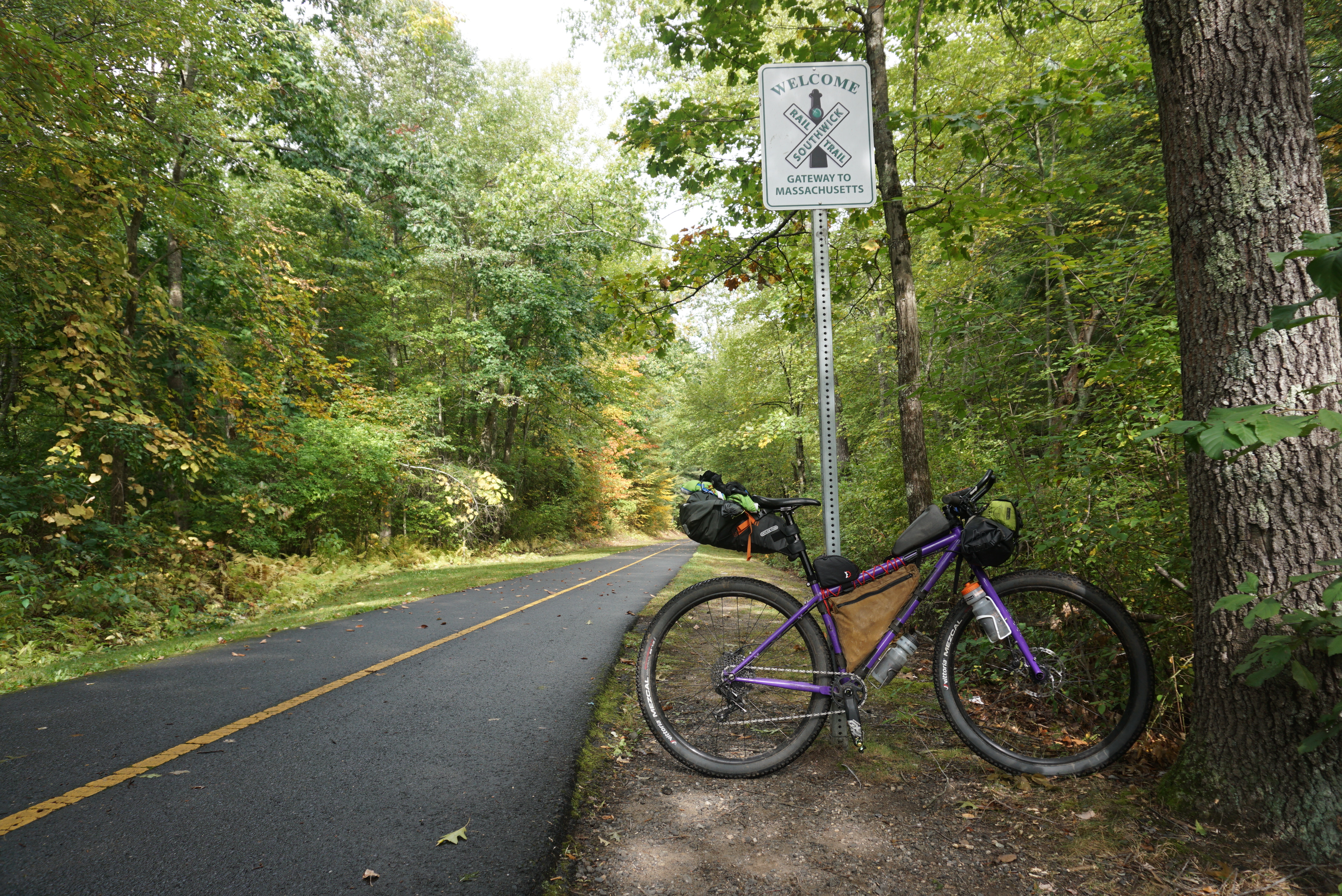 Successfully reaching the Massachusetts border on the Farmington Canal trail was the one completed objective.

Conclusions from this slightly doomed expedition are as follows:

Embrace the "connect the dirts" / green space hop scotch that is such an integral part of this game in Connecticut.

Research everything.  Don't count on anything I haven't seen with my own eyes, and conduct more small-scale scouting trips.

The next version is coming together nicely and will be ridden end to end sometime during the summer of 2021.